On Device Research has today released findings from its social media effectiveness measurement solution that reveal the optimal video ad exposure time on social platforms is three to four seconds: a time frame in which both Brand Consideration and Purchase Intent are maximised, increasing by +4% and +6% respectively.

It was little over a year ago that Marc Pritchard, Chief Brand Officer of the world’s biggest advertiser, made a rallying cry at DMEXCO for the digital ad industry to create the next generation of video ads. Citing the fact that only 20% of video ads are viewed for longer than two seconds, the need to drive brand impact in an ever shorter time frame in a medium where consumer attention is scarce, is more important than ever.

One year on, and having tested several video ads running in social platforms across 3,000 survey responses, On Device Research has seen a trend develop that highlights that while video ads in social environments can indeed have impact after just one to two seconds of viewing time, optimum brand impact is seen at just three to four seconds. At the three to four second mark, a +4% increase in brand consideration and a +6% increases in purchase intent has been recorded on average.

While previous industry research (such as this 2016 study) points to shorter video ads having an impact on smartphone, perceptions around the definition of “short” will increasingly fall in line with Marc Pritchard’s two-second claim if the trend seen in On Device’s data continues. 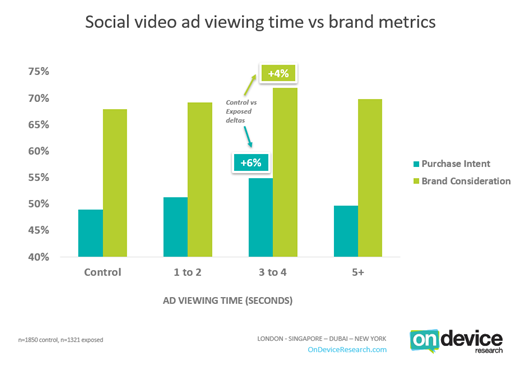 It’s clear from the ads tested, that creative design is catching up with the reality around the attention consumers have for online video ads. With On Device Research’s Guide to Retail Marketing Effectiveness revealing that four fifths of consumers always or very often skip through video ads in social platforms, the importance of having immediate impact is again highlighted. Early and prominent branding and product shots are both commonalities of successful social video ads.

The debate around the role of social platforms such as Facebook and Instagram in the marketing mix, continues to rage on, as highlighted by the recent high profile disagreements between Mark Ritson and Gary Vaynerchuk. Either way, what is clear is that social video can drive brand impact throughout the branding funnel and that the time we spend with ads matters more than ever in terms of maximising impact.

Find out more about how On Device Research tests ads in social environments here or get in touch with info@ondeviceresearch.com today.