Indonesia is a country that is far too often associated with paddy fields and beaches rather than seen for what it really is - a young, buzzing country quick to adopt anything and everything new, especially when it comes to mobile. 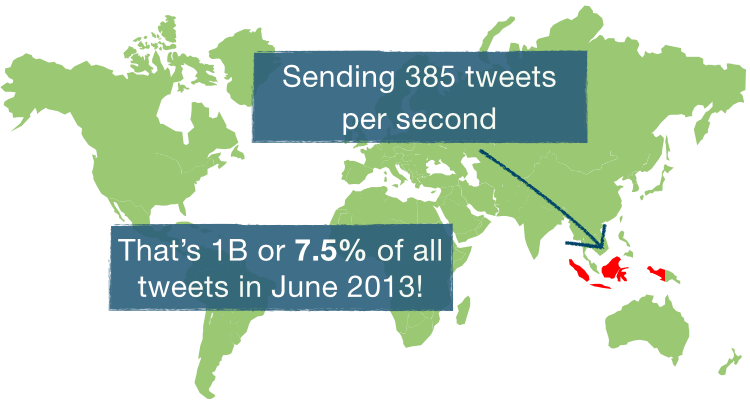 We were blown away by how social media savvy the "hidden tiger of Asia" is! Our free report uncovers the biggest mobile trends in Indonesia, dig in!

7.5% of all tweets come from Indonesia

With such a young population, social media naturally assumed its position as number one activity on the internet in Indonesia. Look at some of these key statistics:

With a country that is made up of 247 million people spread across 17,500 islands - it's no surprise that mobile is the most dominate way of accessing the internet and staying in touch!

eCommerce - the next big thing

It's not "mission accomplished" for internet in Indonesia, there's still plenty of room for growth. Social networking has rapidly evolved as mobile phones and the internet become a necessary part of every Indonesian's day-to-day life.

Indonesians now use social networks and messengers as a place to chat, play games and buy things.

At present, growth in the eCommerce sector has been hindered by lack of mobile money solutions. There is still a large proportion of Indonesians whom do not have a bank account, and others don't trust online payments. This will change soon, with 59% of Indonesians already expressing a desire to purchase things through their mobile phone.

With internet predicted to grow to 145 million users in 2015, it won't be long before Indonesia becomes a fully-fledged mobile-first tiger.