As mobile grows increasingly impactful for consumers and advertisers, marketers need to understand what drives mobile ad effectiveness in the micro-moments of user engagement. Based on in-depth research, Ian Gibbs of On Device Research gives four key considerations for marketers when addressing the role of mobile and mobile creative in the path to purchase.

Mobile is beyond a mass medium now. It’s an entirely ubiquitous medium. With newly released forecasts from Zenith predicting that 75% of our internet usage will be on mobile in 2017, and the IAB revealing that mobile display ad spend has for the first time overtaken desktop, there is seemingly nothing that can stand in the way of mobile’s meteoric rise as the digital platform of choice for consumers and advertisers alike.

The rise in mobile does not come without its planning challenges, however: its constant proximity to consumers, the personal connection created with mobile devices over and above other electronic devices owned, the constant stream of incoming communications from friends and family, and the constant demand, by consumers for information with an immediacy never seen before, all contribute to an ongoing rhythm of ‘micro-moments’ where we engage with our smartphone for short bursts throughout the day.

How should brands and advertisers engage with consumers in these micro- moments? And indeed, is each moment even enough to create any meaningful impact on a consumer’s consciousness?

Data from the mobile effectiveness specialists On Device Research would suggest so. As covered in last April’s issue of Admap (‘Measuring mobile ads’), mobile display campaigns can drive an improvement in brand metrics throughout the branding funnel – from brand awareness to ad recall, and from brand consideration to purchase intent. While the weight of evidence (On Device has tested 170 mobile campaigns in total) is strong, the question remains as to why we see such a significant impact on consumers exposed to mobile ads. What is it about mobile that drives such a strong brand performance in these small but not insignificant micro-moments?

The answer to this question lies in unpicking how consumer behaviour on the path to purchase has evolved in the age of mobile, and crucially the impact of creative depending on where in the purchase journey a consumer sits. Below are four key considerations for marketers when addressing the role of mobile and mobile creative in the path to purchase.

Mobile display ads might drive brand awareness, but even without ad exposure, consumers are already undertaking research on their mobile devices, for products they want to buy (either in-store or digitally).

That micro-moment where consumers take their smartphone from their pocket or bag to make a more informed purchase decision provides a uniquely targetable opportunity for advertisers to employ geolocation data to dynamically serve appropriate creative.

Research conducted in 2016 by On Device Research on behalf of the IAB revealed that across nineteen markets surveyed, nearly half of all mobile consumers have looked for a better price for a product on their phone, 43% have looked for more product information, and over a third have looked at product reviews. To influence and aid consumers on their purchase journey at these moments of heightened product receptivity is an opportunity that cannot be ignored.

The creative implication: There is no such thing as a one-size-fits-all approach to mobile campaign planning, and creative performance varies greatly according to campaign goals. The IAB has reported that growth in mobile advertising has been driven by an insatiable appetite for mobile video, and that rich media formats account for half of all mobile display. When you consider that these are the formats that are most effective at the upper end of the branding funnel, it’s easy to see why.

On Device’s analysis of over 170 mobile brand effectiveness studies has revealed that for upper-funnel metrics such as brand awareness and ad recall, a combination of video and interstitial or banner creatives works hardest. For brand-building campaigns, employing rich creative formats that grab the attention and immerse the ad viewer is going to reap the greatest rewards. Using these formats to provide key product information and actively influence brand and product awareness and understanding at those micro- moments of product research (consider the Saturday afternoon food shop, or the after- work indulgent clothes shop, for example) is a vital consideration.

Once a product has been researched, either online or in-store, mobile consumers are showing an increasing propensity to purchase via mobile. The once fiddly process of entering your credit card details is now greatly simplified as more digital platforms gear themselves up for a mobile-optimised world. The rise in mobile wallet usage (which 18% of mobile purchasers now use, rising to 23% in APAC), and an explosion in all- purpose messaging apps such as WeChat in China through which one’s entire digital life can be managed, have certainly contributed to the trend.

On Device’s and the IAB’s research has revealed that, on average, 75% of mobile internet users have purchased a product or service via their smartphone/tablet in the past six months, and furthermore, that mobile purchases and payments account for nearly one third of total monthly purchases among those surveyed. Convenience (49%) and time saved (46%) are cited as the key drivers of mobile purchase, and this in part explains why 62% of mobile shoppers said they were planning to purchase more products or services via their mobile device during the next six months.

The creative implication: The IAB may have reported that growth in mobile display has been driven by video and rich media, but there are millions of impressions being served against more standard formats every day that can also reap rewards for advertisers – it simply depends on which end of the branding funnel you are most concerned with.

At the lower end of the funnel it is in fact simply interstitials and banners that work hardest, according to On Device’s analysis of its ad effectiveness database. While employing rich creative formats is most rewarding in the brand-building space, when it comes to purchase intent a simpler and less intrusive approach can work best.

Finding that micro-moment when consumers are considering making a purchase on mobile (a micro-moment that can be identified by overlaying behavioural analytics and search data), and swaying the decision-making process in a far subtler manner than would be done by a more intrusive ad, can pay real dividends for brands.

Enter showrooming. Mobile devices serve not only as a platform for direct purchase and research, but also aid consumers in their purchase journey, driving multiplatform purchase behaviour. For those consumers for whom researching a product on a mobile device is not enough, both showrooming and multi-screening are taking place.

Some 44% of mobile purchasers have purchased a product on their mobile device after checking it out in-store, while 38% have done the same after researching via laptop/PC. It is widely acknowledged that the traditional model of the purchase funnel is not as linear as it was once thought to be and the phenomenon of showrooming is a case in point. Mobile micro-moments do not exist in splendid isolation in a digital world of their own: they are fully integrated with our day- to-day lives, and planners should consider that consumers could be just as likely to research in-store and purchase on mobile as they are to research on mobile and purchase in-store.

The creative implication: As eMarketer and indeed many others will tell you, this growth in product engagement and brand research via the mobile device has been driven by Millennials. A much-maligned term it may have become, but ‘Millennials’ is now shorthand for helping marketers understand the differences between generations. And Millennials do respond differently to mobile advertising, and therefore the nuances of their receptivity must be considered in the campaign planning process. They are becoming an ever harder-to-reach target audience: they are more likely to block ads and are more cynical and discerning when it comes to branded comms. If we know they’re engaging with cross-channel research and purchase, however, how should we be talking to them?

The answer lies in a combined approach to mobile creative. Rather than viewing video, interstitials or banners in isolation, it is varying combinations of each that drive purchase intent among the under-35s vs. those aged 35-plus. Digitally savvy Millennials can process multiple communications at once, they can process many more images and concepts simultaneously, and they have a higher level of multisensory processing capacity – making them amenable to communications with an interactive element.

The relationship between mobile activity and physical in- store activity doesn’t just manifest itself as a broad macro trend in consumer behaviour, but exists at the specific and targeted campaign level too. While the On Device/ IAB research reveals that half of all mobile internet users have made a purchase in-store after researching on a mobile device, ODR’s proprietary Mobile Store Effect research solution employs geolocation data to allow brands to assess the impact of mobile creative exposure on visitation to a specific physical retail store location.

Results so far point towards a strong in-store effect, with a case study for a well-known UK supermarket revealing that the mobile creative drove a 46% uplift in store visitation vs. a control group of those who had not been exposed to the ad. Such an approach also allows brands to start unpicking the relationship between self- reported behaviours and actual behaviours – a thorny issue in the world of advertising research, but one which appears to drive strong correlations across four Mobile Store Effect case studies. As Figure 1 shows, purchase intent uplift and in-store visitation uplift are almost perfectly correlated, with a score of 0.988.

In the world of mobile, what people say they do, and what they actually do, are strongly aligned, again providing evidence that reaching them with a piece of comms at a micro-moment of hyper-receptivity will have a tangible real-world impact.

The creative implication: We’ve established that more standard formats are key to driving purchase intent, over and above rich media and video. If you want to boost the effectiveness of what might seem to be a more creatively limited format, however, the key lies in playing on the emotions.

The crucial role that emotions play in ad creative is a long-established fact of advertising theory and ODR’s mobile effectiveness database has built upon this body of work by providing evidence that there is a robust link between emotions and brand effectiveness in the mobile space. The top 20% of ads that perform well in terms of emotion on average drive an uplift in purchase intent that is nine percentage points higher than the bottom 20% (Figure 2).

Mobile ads that elicit a positive emotional response work harder. They stick in the mind and create more deep-rooted neurological connections. As author Colin Shaw pointed out recently in Mediaweek, the link between emotion and brand loyalty is a strong one. To engage with consumers on an emotional level in those micro-moments when they themselves are engaging with their mobile device is crucial for driving the most efficient campaign effect. 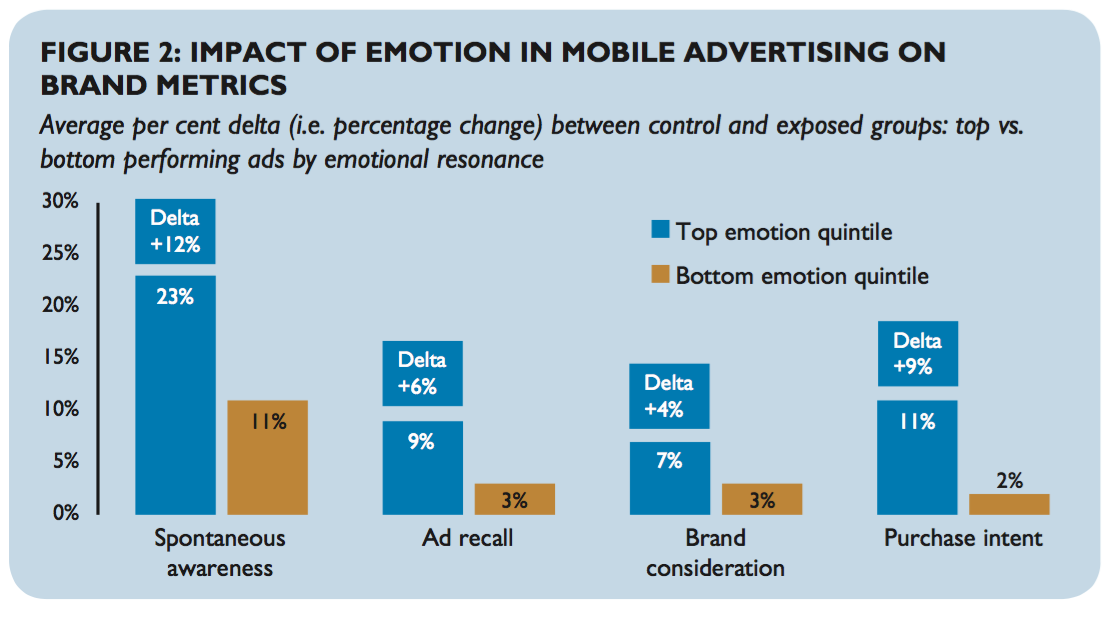 There is a short-termism which is currently having a profound effect on the digital advertising ecosystem. The rise in (or arguably misuse of) programmatic trading practices has driven a culture overly dependent on binary metrics such as clicks, which pays less attention to measures of brand effectiveness or offline behaviours.

This is why an understanding of what drives mobile ad effectiveness – and the measures and metrics that can be used to affect it – is so crucial. Mobile is as effective at building brands and driving action as any other medium. Mobile consumption may be typified by micro-moments of usage more than other platforms, but this should not be confused with an inability to have a profound effect on consumers throughout all stages of the purchase cycle.